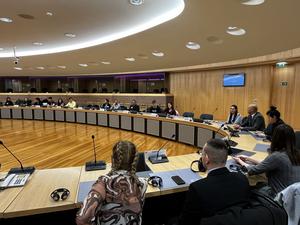 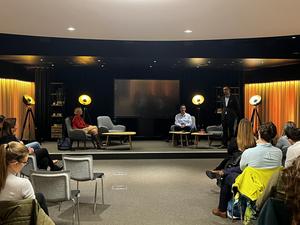 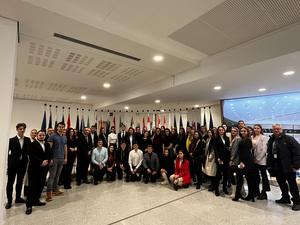 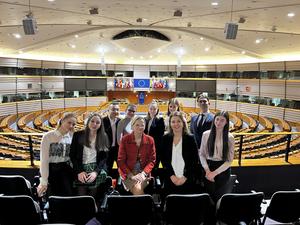 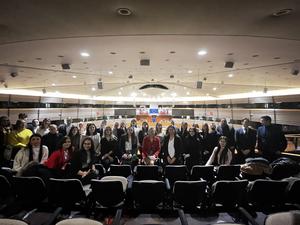 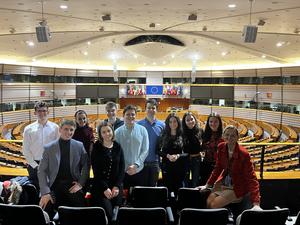 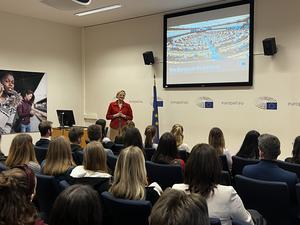 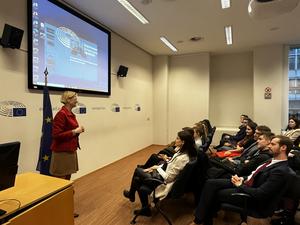 Between 11 and 12 January 2023, about 40 outstanding students of the University of Public Service participated in a study trip to Brussels, thanks to the support of Enikő Győri, member of the European Parliament and research fellow of UPS. The students, selected from more than 150 applicants, represented all faculties and levels of education at the University. They were accompanied by three members of the Department of European Studies, Prof Dr Boglárka Koller, vice-rector for international affairs and associate professors Dr Attila Marján and Dr Tibor Ördögh. This trip allowed the students to visit the institutions of the European Union and gain insight into their daily work through discussions with the staff.

The two-day trip started on the morning of 11 January. After a two-hour flight, the excited students were able to admire the Anglo-Saxon-style buildings of Brussels. The young Hungarians first visited the European Parliament, where they had the opportunity to listen to a short but fascinating presentation in English on the functioning of the institution. Afterwards, Enikő Győri welcomed the participants with an interesting presentation and was happy to exchange views and answer questions with the students. Thanks to her, the young were able to admire the plenary session room, which until now has only been seen in textbooks, where MEPs debate the most important issues affecting the European Union. This unforgettable moment was, of course, captured in a group photo.

The second stop on the first day of the study trip was the Bruegel Institute, not far from the European Parliament, where the group was welcomed by Zsolt Darvas, a researcher at the Institute. In a spacious room of the institute, energy policy expert Giovanni Sgaravatti gave a very interesting lecture on the institute's history and its main activities, as well as on current issues in world politics and the European Union. The audience listened with rapt attention to the energy expert's presentation of recent statistics and possible futures of the energy crisis, one of the serious consequences of the current Russian-Ukrainian war. Zsolt Darvas then spoke about his career, his work and his experience at the Institute.

Following the professional events, the day ended with a dinner at the Chez Leon restaurant in the centre of Brussels, where the students had the opportunity to enjoy a delicious meal and a casual conversation with Enikő Győri. The MEP listened with great interest to the youngs’ life stories as they went from table to table, giving them advice on how to build a career in the European Union. After a sumptuous dinner, the young people shared their experiences of the first day over a glass or two of Belgian beer.

On the second day, the group's first trip was to the Parliamentarium, which with its 360° cinema screen and touch screens, allowed participants to gain a better understanding of the functioning of the European Parliament. The Parliamentarium outlines the process behind law-making for Europe as a whole and shows how MEPs respond to the challenges of the day. Despite the short time spent in the building, students thoroughly enjoyed exploring the interactive rooms filled with different content.

Before the last professional programme of the study trip, the group members had the opportunity to choose from a variety of restaurants in the Place du Luxembourg, the square where the European Parliament staff have their daily lunch. After the meal, the group visited the European Commission, where they were seated at a large round table with the name tags of the members of the European Union and listened to a presentation by Szabolcs Horváth (Várhelyi Cabinet) and two of his colleagues, who explained their daily activities at the European Commission, the institution's competences and the current political situation in the European Union. Here, too, questions from interested students flooded the speakers, who were happy to help them and, in doing so, contributed to their knowledge of the European Union.

After the visit to the European Commission, the team had the chance to wander around the centre of Brussels before heading to the airport. Some of them admired the beauty of the main square; took photos with one of the city's most famous landmarks, the Manneken Pis statue; ate a Belgian waffle or bought Belgian chocolates. The day ended with a two-hour flight in the evening.

Students and teachers alike were enriched with professional knowledge, personal and unforgettable culinary experiences during the two-day study trip to Brussels. Thanks for the meaningful programmes go first of all to Enikő Győri MEP, secondly to Lilla Kövesdi and Dalma Forgács, without whom this trip would not have been possible, and to Péter Jakab, who took care of the safety of the group members.