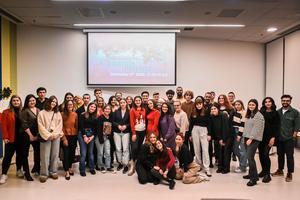 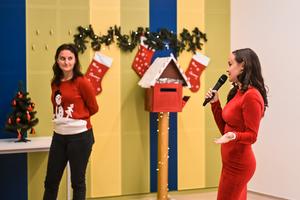 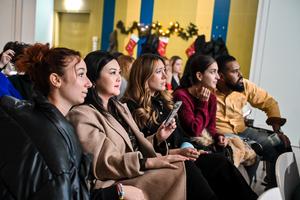 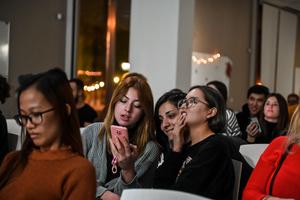 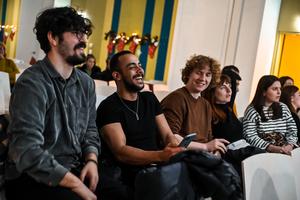 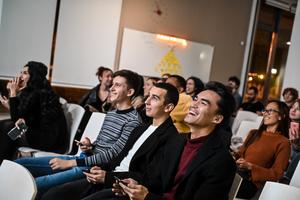 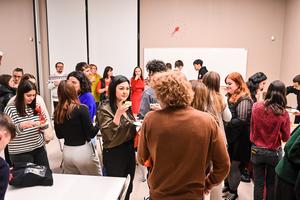 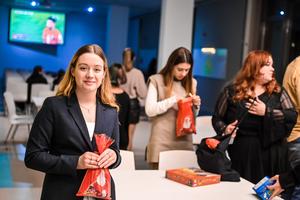 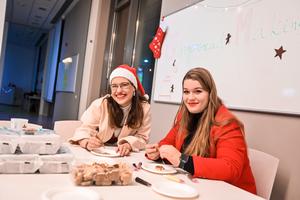 "'Twas the night before Christmas, when all through the house
Not a creature was stirring, not even a mouse;
The stockings were hung by the chimney with care,
In hopes that St. Nicholas soon would be there;

The children were nestled all snug in their beds,
While visions of sugar-plums danced in their heads;
And mamma in her 'kerchief, and I in my cap,
Had just settled down for a long winter's nap,

When out on the lawn there arose such a clatter,
I sprang from the bed to see what was the matter.
Away to the window I flew like a flash,
Tore open the shutters and threw up the sash.(...)"

The event started with the opening remarks of Lídia Kamilla Nemes, President of the International Committee. Her speech was followed by the greeting of the vice-dean for international affairs of FPGIS, Dr Krisztián Péter Zachar, who took the opportunity to recite the poem Twas the night before Christmas. He also spoke about the spirit of the holy Christmas Eve and the legend of bishop Saint Nicholas.

After the openings, a short heartwarming cartoon based on the tale of Mihail Pljackovszkij, The hedgehog who could be petted, was shown to share the message of Christmas: love, support, integrity,  solidarity, hope, generosity and empathy. It was followed by a quiz, where teams competed. International students had to answer twenty-eight questions regarding Christmas and Budapest correctly. Three groups achieving the most scores won Erasmus+ gifts, but Santa did not let the rest of the young leave empty-handed. Due to the Hungarian tradition, each attendee of the night was given a packet of sweets. After the organized programmes, students had the opportunity to enjoy the rest of the night in a more uncasual way. While eating sandwiches and snacks and drinking hot tea, they could play board games, get to know each other's Christmas traditions, and celebrate together before the exams.
Students participating in the various international exchange programmes closed the evening with - maybe - the most exciting activity. Every participant was invited to a night skate in Budapest Park, which was open exclusively to them.