Only peace can be "holy", war can never be 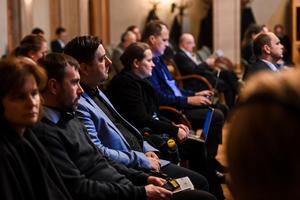 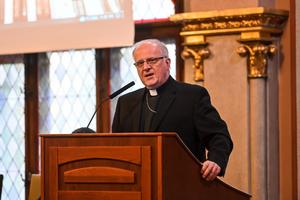 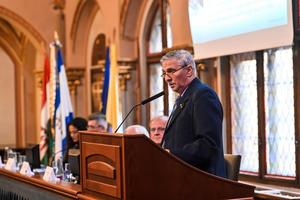 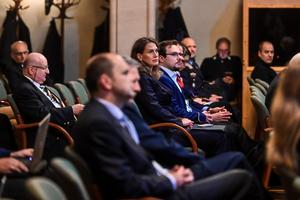 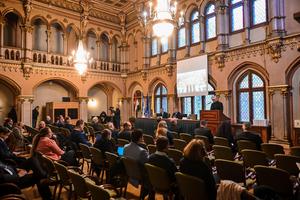 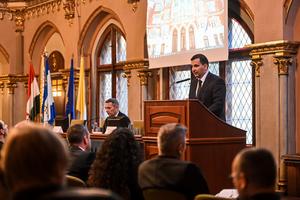 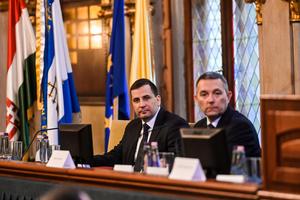 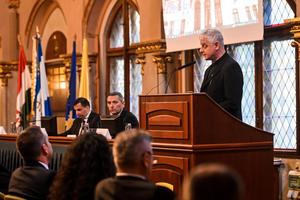 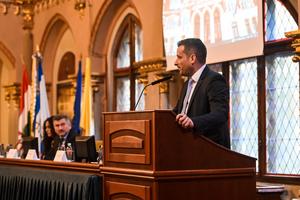 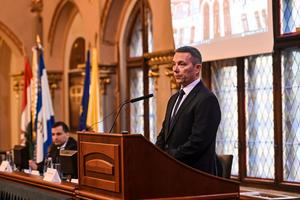 “The dramatic negative ecological consequences of wars also confirm that only peace can be "holy", war can never be” - Gergely Deli Rector of Ludovika University of Public Service quoted Pope Francis at the conference discussing the connection between the use of military force and environmental damage. At the international conference, Apostolic Nuncio Michael Wallace Banach emphasized that the Holy See supports peace, which means respecting international standards for the protection of basic human rights.

On November 22 at the all-day scientific meeting organized by the Religion and Society Research Institute of Eötvös József Research Center (EJKK) of the University of Public Service (UPS) and Pope Saint John Paul II Research Center (TVKI) of Pázmány Péter Catholic University (PPKE), with the participation of international experts, topics such as green aspects in the field of military procurement, conservation of nature as a means of prevention, the UN principles on environmental protection in the event of military conflicts were discussed, but those who were interested could also hear about war and security challenges in the approach of the Catholic Church and the effect of the use of military force on regional biodiversity.

Gergely Deli, the rector of the UPS, emphasized that the restoration of war damage is still a largely unsolved issue today. “How and when can damage caused by chemical weapons, radioactive materials, or mechanized warfare be repaired?” he asked the question. The process is often long, sometimes lasting centuries, in other cases the consequences of war are irreversible. Even today, it is unlikely that any side in an armed conflict would refrain from using a particular weapon or tactic simply because of ecological dangers. However, some international organizations, such as NATO, consider the environmental consequences of military operations in policy planning. However, no one can guarantee whether the opposing party will behave in the same way.

The Rector of UPS mentioned the landmark speech of John Paul II on January 1, 1990 on the International Day of World Peace, in which the Pope said that any form of war would cause incalculable ecological damage on a global scale. But even local or regional wars, however limited, not only destroys human life and social structures, but also damage the land, destroying crops and vegetation, poisoning soil and water. The survivors of the war are forced to start a new life in very difficult environmental conditions, which in turn results in extreme social unrest, with further negative consequences for the environment. Gergely Deli added: “nothing illustrates the commitment of the Holy See better than the message of Pope Francis, who declares that only peace can be "holy", war never. There is no "holy" war. This is especially true when you look at the environmental damage the planet has suffered in just the twentieth century. According to Pope Francis, wars have such dramatically negative ecological consequences that cannot be justified on the basis of either classical or modern interpretations of the just war theory”, explained the rector of UPS.

“The protection of nature is not far from the concept of the Catholic Church. It is true that in recent years it has only become generally emphasized that natural values ​​must be preserved, but this has always been evident for Catholic theology. The book of creation informs us that man was given a special responsibility by God when the creator entrusted him with the Garden of Eden, symbolizing the creatures. In Catholic philosophy, whether we talk about the protection of the created world specifically or not, it has always been considered evidence that man is not the unlimited master of the created world”, said the rector of the PPKE in his greeting. Rev. Mond. Géza Kuminetz emphasized that the encyclical of Pope Francis begins with Laudato si - which is the Magna Charta of the Catholic Church's green policy – where the following idea appears: "war always seriously damages the environment and the cultural wealth of the population, and the risks increase enormously if we take into consideration nuclear and biological weapons”. Despite international conventions banning chemical, bacteriological and biological weapons, the fact is that laboratory research continues to develop offensive weapons capable of upsetting the natural balance. The rector of the PPKE also mentioned the encyclical of Pope Francis entitled Fratelli tutti, in which the head of the church traced the common responsibility to the fact that we are all brothers. "If we are all brothers, then the earth is our common home. Today's conference is a beautiful manifestation of our joint efforts," he concluded.

László Tamás Zsiga, the Deputy Secretary of State responsible for human policy at the Ministry of National Defense, said in his opening speech: “with the development of technology, today's people have much more power over themselves and the entire planet than anyone before. It would be possible for us to destroy it, but we also have the opportunity to choose development and prosperity like a good farmer," he stated. “We have a huge responsibility in treating humanity's heritage, Earth, well, and stewarding its natural, environmental and human values ​​too. This is provided by the protection of creation, which encourages us to preserve the world around us, treat it justly and wisely, and also helps us navigate the issue of war”. The deputy state secretary added: “with the development of technology, many new legal and ethical questions arise, the discussion of which and their satisfactory regulation are an important task. We need dialogue, proposals, thinking together and responsible decision-makers so that the generations that come after us can also experience and live all the beauty of the created world. If all our thoughts are for peace and not for destruction, then we are on the right track," László Tamás Zsiga concluded his speech.

According to Major General József Padányi, the head of the Military Technical Doctoral School of the UPS’s Faculty of Military Sciences and Officer Training, it is worth asking the question of what principles should be implemented to talk about civil-military cooperation, and then we will get closer to why peace support operations are the real environment for this task. The major general believes that cooperation skills (understanding the civilian environment), finding common goals, cultural tolerance, transparency (authenticity), impartiality and the principles of good communication are essential. When any of these are missing, it is difficult to talk about effective civil-military military cooperation. József Padányi emphasized that the efforts of civil-military cooperation are concentrated in three areas: 1. work for the sake of military power; 2. supporting the civilian environment with the specific means of military force, but only after the priority of the first point; 3. continuous maintenance of the relationship between the two areas, with the organization created in connection with the military force. Civil-military cooperation is a support element in the organization of the military force, which helps to implement the commander's vision with its specific tools, methods, and specially trained professionals. Primarily, but not exclusively, it is effective in operations where acts of violence are no longer typical and the creation and maintenance of a safe environment is not an illusion, he said.

Archbishop Michael Wallace Banach, apostolic nuncio, emphasized that the diplomatic activity of the Holy See is meant to promote the coexistence of different nations and promote brotherhood between peoples, because for him the concept of brotherhood is equal to effective cooperation that serves the common good and the benefit of individuals. The Holy See supports peace, which means respecting international norms for the protection of basic human rights. Michael Wallace Banach also said that dealing with environmental damage is one of the main tasks of the Holy See's diplomatic activity.

“We are responsible for our world and our environment, for the next generations, and we are now beginning to understand that certain lifestyles are dangerous for creation”, emphasized Michael Rühle, head of NATO's Climate and Energy Security Department. “We are able to understand all this because we see and experience the environmental damage we cause”, he continued. Michael Rühle cited NATO as an example, whose activities are a good example of how to better understand environmental challenges and respond to them with concrete, decisive action. He said that NATO made improvements in order to measure the greenhouse effect more effectively, which were offered to member countries in order to support national efforts in this direction. He noted that, next to the Russian-Ukrainian war, climate change is the most pressing issue at the moment.

Col. Florin Adrian Obreja highlighted that the environmental consequences of the activities of military forces in war conflicts are the most serious. There is a lot of debate among environmental protection experts about how to protect our environment from the harmful effects of the use of military force. Environmental damage can cause social and economic instability. Protecting our environment during military operations can result in security stability. The colonel explained that NATO's uniform environmental protection guidelines were developed by the Environmental Protection Working Group after more than four years of work. Commanders at all levels need to know, on the one hand, the significant effects of the military operation on certain elements of the environment, including the potential effects. On the other hand, they must take into account the extent to which the given environment influences the planned military operation, as well as the possible ways of achieving the (military) operational goal. Knowledge of the significant environmental effects is necessary already at the initial stage of operational planning, long before the decision is made, in the early period of the development of alternatives.

Brigitta Hidvéghiné Pulay, scientific associate of PPKE TVKI, stated in her presentation that our economy, life and well-being depend on our most valuable asset, our environment. However, we must realize that the balance of supply and demand is upset, our needs far exceed nature's capacity to provide us with the goods and services we all rely on. Our unsustainable relationship with nature in this way threatens the well-being of current and future generations. According to the PPKE researcher, institutional failure is at the heart of the problem, and the solution begins with the understanding and acceptance that our economy operates embedded in nature, not outside of it. “We need to change our way of thinking, our actions and the measurement of success, we need to ensure that our demands on nature do not exceed nature's supply, and to increase the flexibility of nature compared to the current level, we need to change our economic metrics, transform our institutions and systems”.