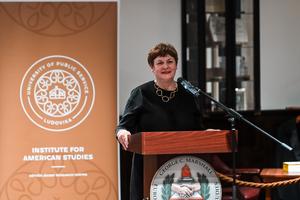 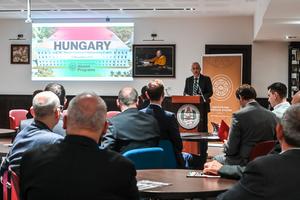 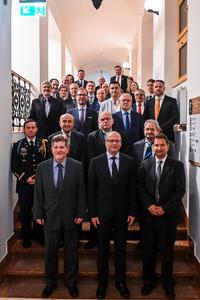 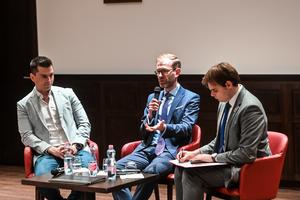 The University of Public Service hosted the annual Hungarian alumni outreach networking event of the George C. Marshall European Center for Security Studies (GCMC) on November 17, 2022. Participants included representatives of the U.S. and German Embassies in Budapest and members of academia who discussed the cross-strait relationship between the People’s Republic of China and the Republic of China (Taiwan) along with its possible ramifications for transatlantic security.

In his welcoming remarks, Dr. Gábor Csizmazia, research fellow at the Institute for American Studies and Head of the GCMC Hungarian Alumni Association, reminded about the relevance of this year’s discussion topic and the significance of networking within the alumni community. The volatile status quo regarding the cross-strait relationship was echoed by Derek Westfall, Deputy Chief of Mission at the Embassy of the United States of America in Budapest, who emphasized the issue of finding a unified transatlantic voice, while Christiana Markert, Deputy Chief of Mission at the Embassy of the Federal Republic of Germany in Budapest, expressed her hope with regard to nurturing this network of security sector professionals and to the balanced revision of the China strategy that can serve as a prospective future for states across the Atlantic.

The issue was discussed in detail by Dr. Frank Mouritz, research associate of Bundeswehr University-Munich, and Dr. Tamás Matura, assistant professor at Corvinus University of Budapest and non-resident fellow at the Center for European Policy Analysis. Dr. Mouritz stressed the importance of Taiwan in Beijing’s historic mission of national rejuvenation and the closing window of opportunity to unify the People’s Republic of China with Taiwan. Should an invasion take place, the world economy and Chinese markets would suffer disastrous consequences. Dr. Matura added that the strategies on the table are more diverse than status quo or a full-scale military operation. A scenario requiring the deployment of U.S. forces into the South China Sea would render Russia to the periphery of focus in U.S. foreign policy and reshape the military architecture of NATO. Accordingly, both panelists reminded about the necessity for Europe to realize that Taiwan is not a bilateral issue between the U.S. and China, but a common problem that needs to be de-escalated.

Members of the GCMC Hungarian Alumni Association and invited professionals could continue these discussions with the experts after their panel, in accordance with the engagement and networking mission of the Center. As Frank Lewis, GCMC Alumni Relations Specialist, highlighted, 2022 has been a remarkable year in the history of the George C. Marshall Center, as the institution passed the milestone of 15.000 graduates – 218 of whom are Hungarian professionals.