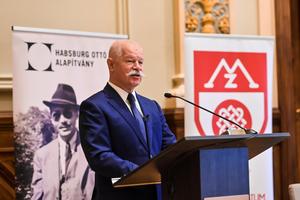 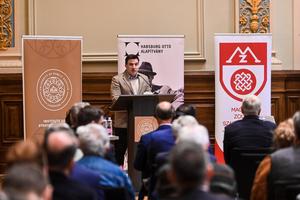 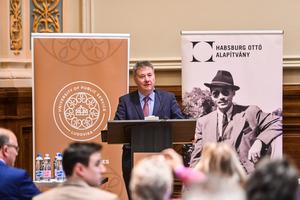 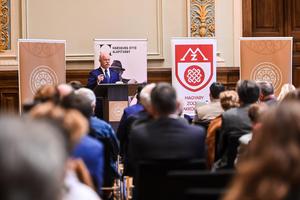 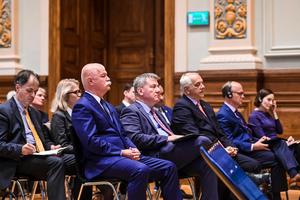 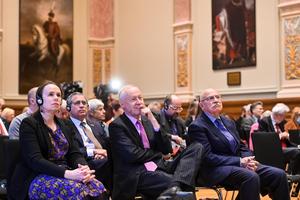 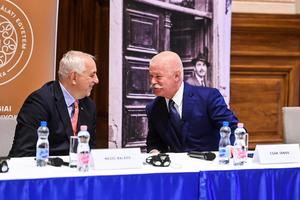 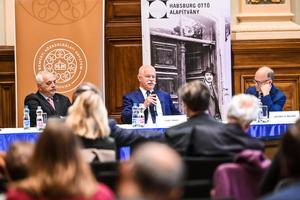 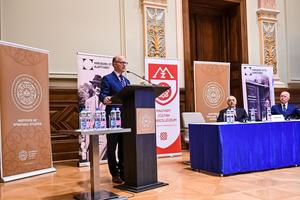 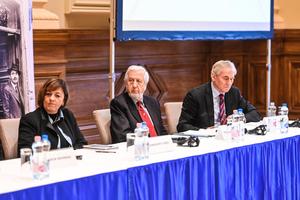 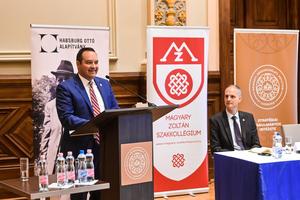 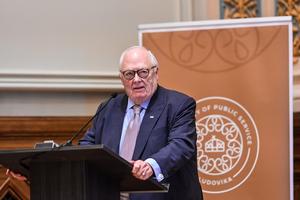 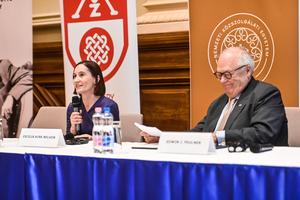 Today, the ideas embodying the American ideal are being "twisted": freedom, equality before the law, and justice. “The American way of thinking is dominated by questions of the creation and distribution of wealth instead of religion and morality”, said János Csák, Minister of Culture and Innovation at the conference "Conservative minds - the legacy of Otto Habsburg and other conservative thinkers from a transatlantic perspective" organized by the University of Public Service (UPS). The event was organized in the Széchenyi Hall of the Ludovika Main Building. During the conference the interactions between Europe and the United States of America present in political thought and foreign policy were explored.

Gergely Prőhle, director of the Habsburg Ottó Foundation and the Institute of Strategic Studies of UPS, stated in his opening speech that he thinks it is important that we do not perceive the transatlantic relationship as a "raised ideological finger", but try to think of it as an exchange of ideas. Balázs Mártonffy, head of the Americas Research Institute of the UPS Eötvös József Research Center, spoke about the foreign policy dilemmas of the United States in the post-unipolar moment. Among these, he mentioned competition with China, changing the transatlantic relationship system by weakening Russia and strengthening Ukraine, as well as transcending the world of interest spheres. Balázs Mártonffy also drew attention to the fact that the role of transatlantic relations, which is the main topic of the conference, must be found in a "blocking multipolar world".

In a panel discussion on the importance of European-American intellectual and cultural connections, Culture and Innovation Minister János Csák said: “American ideals, freedom, equality before the law and justice embody the most beautiful ambitions of life on earth. A movie about the future of Europe is taking place in the United States today," said János Csák, who stated that the country has created material prosperity for huge masses of people in the past 250 years. Today, however, the founding ideals are being twisted and the majority of American conservatives have also become utilitarian, placing material and economic performance before or above the family. “It is impossible to know what the future will bring, whether the American elite will be able to make a national strategic change that puts family and virtues at the center” the minister said.

Jeffrey O. Nelson, executive director of the Russell Kirk Center for Cultural Renewal, said of their namesake, Russell Kirk (the founder of intellectual conservatism): “he gave American conservatives an identity, with Otto Habsburg he intended to strengthen Christian Europe, and he also maintained contact with scientists of Hungarian origin such as Molnár Tamás and John Lukacs”.

The event discussed the European influences shaping the foreign policy of the United States. According to Andrew Bremberg, president of the Victims of Communism Memorial Foundation, transatlantic solidarity was strong during the Ukrainian war, but the United States alone cannot create peace in Ukraine, because it also has to face China indirectly, due to the fact that one of the legs of the future of conservatism in the 21st century is the anti-communist effort. Former ambassador Tamás Magyarics, professor of the history and foreign policy of the United States, sees that thanks to Vladimir Putin, Europe is now a priority for American foreign policy, but seeing the tendency of the situation, it will become a "secondary strategic area" in the future.

According to Géza Jeszenszky, former foreign minister and former ambassador, NATO brought peace and stability to Central Europe, without which Ukraine would not be the only one facing aggression today. In her presentation, former state secretary, ambassador, and expert on transatlantic cooperation, Réka Szemerkényi mentioned Russia's loss of influence in many international organizations, Ukraine's new national identity, and also the European Union's strategic steps, unity and brave facing of challenges among the strategic consequences of the war. The moderators of the panel discussions were Márton Ugrósdy, Deputy Secretary of State in charge of the Prime Minister's Office of Political Directors, and Balázs Mezei, professor at Corvinus University of Budapest.

Edwin J. Feulner, founding president of The Heritage Foundation, praised Otto Habsburg's legacy in a keynote speech. He said: “Otto Habsburg's political legacy is the conservatism of the heart. The initiator of the pan-European movement believed in civilization and Christianity, fought for them and won the battle.”