"We have to learn from the past, but we still have a lot of work to do" 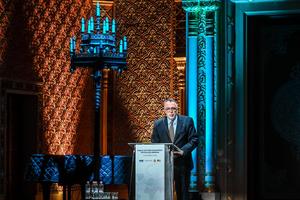 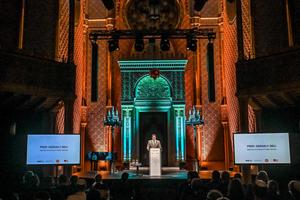 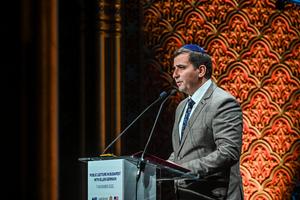 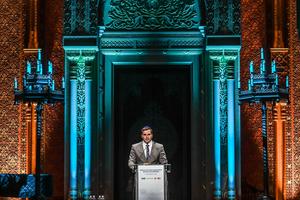 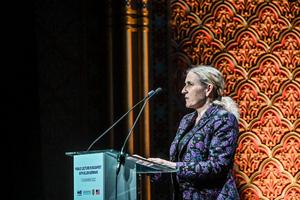 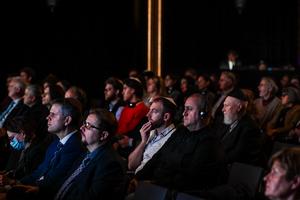 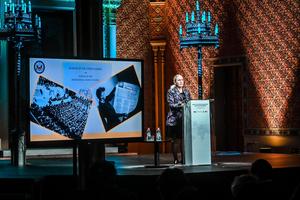 The World Jewish Congress, in cooperation with the Embassy of the United States of America in Budapest and the University of Public Service, organized a lecture with the participation of Ellen Germain, the US Special Envoy for Holocaust Affairs, on November 7 at the Synagogue of Rumbach Sebestyén Street.

At the event, András Heiszler, president of the Association of Hungarian Jewish Faith Communities (Mazsihisz), gave an opening speech, thanking the organizers, the University of Public Service and the World Jewish Congress for their work. "It is important that we have friends who pay attention to us," he said, adding that Hungary is in a special situation within the European Union. “Jewish people live here in physical safety as zero tolerance against anti-Semitism was declared; the situation of Hungarian Jews is better than that of their Western European counterparts in many aspects”. However, he emphasized the role of historical perspective. During the Holocaust, 75 percent of Hungarian Jews were killed, which is particularly important to remember. András Heiszler expressed his concern about the fact that some public figures use controversial historical figures as role models. More tact would be needed if we do not want the Jews to retreat because of this view of history. I invite the government to a partnership in order to be able to look at Hungary with pride - he concluded his train of thought.

After that, Gergely Deli, the rector of UPS, stated in his speech in English: “anti-Semitism is not only a tragedy of the past, but is also present in our world today and represents a challenge for us. As rector, I am proud that our institution represents the values of the Judeo-Christian communities," he said, referring to university research on persecuted religious minorities and the work of the Religion and Society Research Institute operating within the József Eötvös Research Center. "I lived in an age on this earth/when man became so despicable/that he killed willingly, not only on command," quoted the poet Miklós Radnóti, then added: let's work together so that these dire periods never return.

After the greetings, Ellen Germain gave her presentation. The US Special Envoy for the Holocaust has held this position since August 2021. She joined the US Foreign Service in 1995 and worked in Bosnia, Poland and Iraq, among others.

Ellen Germain said that the US State Department established the Holocaust department in order to strengthen measures against ethnically motivated aggression. In a brief historical review, Ellen Germain said: after the Holocaust, world leaders tried to create a world order based on a democratic value system and international law, with the related institutions. The legal framework was created by lawyer Raphael Lemkin.

“It is necessary to know the mistakes of the past” - to emphasize this, the speaker recalled that during World War II, a ship carrying refugees bound for the United States was sent back to Europe. She also recalled the role of Breckinridge Long, who worked in the Wilson and Roosevelt administrations, and purposely made difficult to move to the Unites States for European Jews who were trying to escape the Holocaust from Europe, and through which "the horrors against the Jews were tolerated as a silent observer" overseas. Later, as soon as Roosevelt found out about the real events in Europe, within days he created the board dealing with refugees, thereby saving the lives of tens of thousands of people. But the immigration quotas still prevented many from entering. “Cruel views spread from top to bottom, making it impossible to help for a long time”- noted Ellen Germain. "Providing justice for the survivors is both a foreign policy and a human rights issue. It is an international problem; the tragedy unfolding in Ukraine reminds us of the horror of wars and the need to provide justice for all victims," ​​she pointed out.

The work of her office rests on two pillars. On one hand, among other things, they try to return the confiscated goods by all means, by developing procedures to support the assessment of claims. One element of this is the JUST (Justice for Uncompensated Survivors Today) program signed by 47 countries, which states that member states must strive to return confiscated assets. The other pillar is education. "My office also passed a number of laws on commemoration and Holocaust education. In the framework of international cooperation, we are trying to fight Holocaust denial and misconceptions. The USA therefore also takes a role in the international organization called IHRA (International Holocaust Remembrance Alliance).” As a result of the efforts made in the field of education, she mentioned that the students who learned about the Holocaust are more open and inclusive, they have a more pluralistic attitude, they are more tolerant, and their critical sense and thinking are more developed.

“We have to learn from the past, but we still have a lot of work ahead of us, just think of Bosnia, Rwanda or Cambodia”, warned the special commissioner. Speaking about Ukraine, she said: “the mass murders that took place there are now being documented, and international mechanisms are being used to investigate them. The USA is committed to promoting accountability and initiating proceedings against the perpetrators”. In response to a question, Ellen Germain stated that the background of the growing anti-Semitism in America could be the result of the polarized political scene and the increasingly widespread appearance of the opinions of the less educated. These trends also highlight the importance of education.

The closing speech of the event was given by Menachem Rosensaft, Executive Vice President of the World Jewish Congress. "Before I came here today, I looked at the bronze shoes (the Holocaust memorial in Budapest - Ed.) on the banks of the Danube, which remind us that it was here that twenty thousand Hungarian Jews were shot into the Danube by the archers. I don't want to hold accountable anybody, but to remind you that horrible things can happen." He added: “The work of Ellen Germain's office is important because it translates the US government's efforts into practical steps to prevent the recurrence of terrible events. It is very important to remember that there are places where this is happening again today. It is an important responsibility for us to remember, and we must fight against the distortion of information”, concluded the vice-president.