Vice-rector's visit in the Embassy of South-Korea 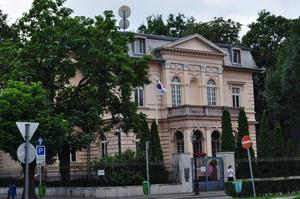 The meeting aimed to discuss issues based on standard foundations and strengthen the South Korean-Hungarian academic and cultural strands, building on the good diplomatic relations between the two countries dating back several decades. During the meeting, the Vice-Rector for International Affairs of the UPS presented the activities of the faculties of the UPS and provided an insight into the university's work in the fields of education and research in the international arena.

Ambassador Park emphasized that Hungary is a popular European destination for South Korean students, as Hungarian universities meet the high educational standards of South Korean students. They both agreed that the acquisition of a non-European foreign language, in addition to the already familiar foreign languages, is of paramount importance for our university students, as some of them are future diplomats. Introducing Korean as a foreign language would undoubtedly increase the competitiveness of UPS students in the international labour market. In addition to the opportunities offered by the Faculty of Public Governance and International Studies, the courses offered by the Faculty of Water Science, such as Environmental Engineering, International Water Policy and Water Diplomacy; and due to the internationally acknowledged and competitive research done by the Faculty of Water Sciences, UPS may transform into a more attractive destination to potential South Korean students.

Both parties agreed that the primary tool for implementing student mobility could be the Stipendium Hungaricum Project. The intertwining of the cultural life of the two countries in Hungary was also identified as a common point of connection, contributing to the success of diversification and internationalization in higher education. Defence policy and cyber security, which play an essential role in the current geopolitical situation, were also among the topics of conciliation. The University's Cyber ​​Security Institute conducts outstanding research on several international projects. Boglárka Koller also emphasized the importance of gaining international experience in the field of science. Among other plans, one of the aims of the UPS is to foster the further growth of the professors of UPS via South Korean University mobility programmes. The primary tool for this would be the Ludovika Fellowship programme.

At the end of the consultation, both sides agreed that this meeting was the beginning of fruitful cooperation. The next step will be to prepare a cooperation agreement.