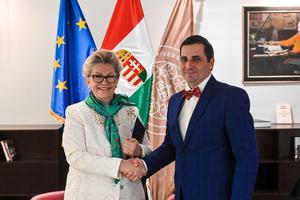 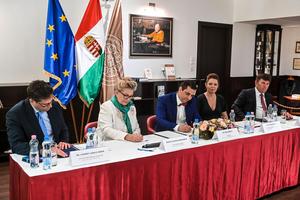 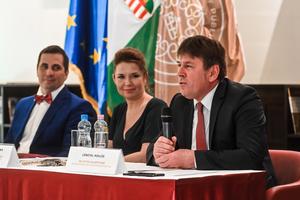 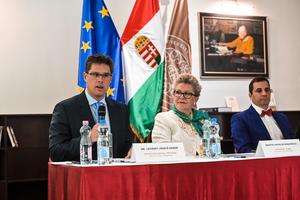 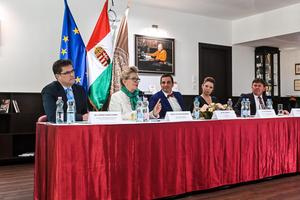 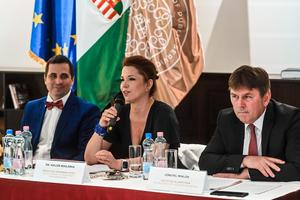 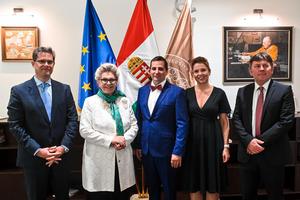 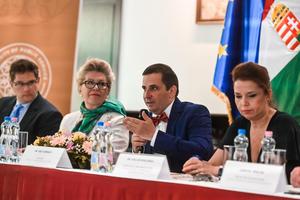 Gergely Deli, Rector of the University of Public Service and Ambassador Katalin Bogyay, President of the United Nations Association of Hungary (UNA-H), former President of the UNESCO General Assembly, signed a Memorandum of Understanding. The agreement aims to establish joint professional, and working relations in education, research, career guidance, and professional and job applications and exchange experience gained. The ceremony took place in the John Lukacs Lounge of the Ludovika Side Building on 12 May. Besides Ambassador Bogyay and Rector Deli, Boglárka Koller, Vice-Rector for International Affairs, Miklós Lengyel, Deputy Secretary of State for International Training Programs of the Ministry of Foreign Affairs and Trade and László Lovászy, Ministerial Commissioner, Secretary-General of UNA-H and Senior Research Fellow of UPS conveyed a speech.

The most important missions that the United Nations Association of Hungary considers essential are the protection of peace and openness, the safety of national minorities and the Christian religion in connection with respect for human rights, Gergely Deli emphasised in his greeting. The Rector also expressed that "it is not an easy task for those who save values on the border of world orders. Similarly to the transmission between the Antiquity and the Middle Ages, 75 years ago, in 1945, the United Nations established new world order. "Today, we cannot be blind to the fact that this world order is falling apart. Another world order is emerging, and therefore the question rightly arises whether it is not anachronistic to sign a cooperation agreement with the UNA-H, a representative of the old world order. I don't think so because there are values ​​in the old world order we should carry to the other side, even squeezed between our teeth; otherwise, the cultural milieu we call Europe will not recognise itself in this new world order. Our University and also the UNA-H have been taking care of and respecting these values so far - so we will have to save them together," the UPS Rector emphasised.

"The history of United Nations Association of Hungary is the history of Hungary, in the light of the global membership of humanity, i. e. the United Nations. Hungary considers UN membership as essential, which is an integral part of our foreign policy. In addition to our daily thematic and political presence, many international UN organisations have been located and been operating in Hungary in the recent years, which is very important for the Hungarian government," Katalin Bogyay pointed out. The President of the UNA-H said, among other things, that the UN is often the only organisation with an adequate mechanism to deal with dangerous situations where a humanitarian crisis threatens war. The UN World Food Program is the only guarantee and where UN mediators can achieve the most for peace agreements to help the suffering people. She added that in the latest period of the UNA-H, she believes in common thinking based on cooperation and addressing young people. She is devoted to the service of the public, which is the basis and the main vocation of the current collaboration. "Being a public servant is a matter of conduct, choice and decision. For me, the University of Public Service means the rebirth of Hungarian ideas open to the world and Europe," the ambassador said.

"We have arrived at the end of an era and the beginning of a new one. 24 February 2022 changed the international regime, and we feel this in Hungary, Europe, and worldwide. Everything we learned about the international system and theories has changed and now requires new approaches from us," said Boglárka Koller, a member of the UNA-H board. The Vice-Rector of the UPS emphasised that the cooperation signed today by the Rector and Katalin Bogyay is a winning relationship, win-win cooperation.

"We may have all come on different ships, but we're in the same boat now," Miklós Lengyel quoted Martin Luther King in his speech. After World War II, the process of globalisation has connected the world's nations increasingly and deeply. The countries achieved many results but also new challenges. "Overcoming such challenges is beyond the power of any state to try alone. Therefore, it is necessary to emphasise multilateral diplomacy and bilateral diplomacy because, as István Széchenyi expressed, everything is difficult for one; nothing is impossible for many. The most important areas of multilateral diplomacy for us are the United Nations, the European Union and NATO. That is why Hungary must have a well-prepared diplomatic service knowing the international processes and the work of international organisations well and up-to-date. Today, two organisations are entering into a close alliance that have been serving this noble purpose for years," the deputy secretary of state emphasised.

"The UN is usually needed when things are not going well. This is when the UN is expected to solve the problems instead of the Member States, at which point many are already talking about global governance. But when things go better, some say the institutional system will change into a 'paper's bureau'. Which definition is true? Neither or both. That is why it would be necessary to understand this incredibly complex system. This agreement came into existence so that science, practical life and society could win and take advantage of the opportunities that may arise from its activities, László Lovászy, Ministerial Commissioner, summed up.