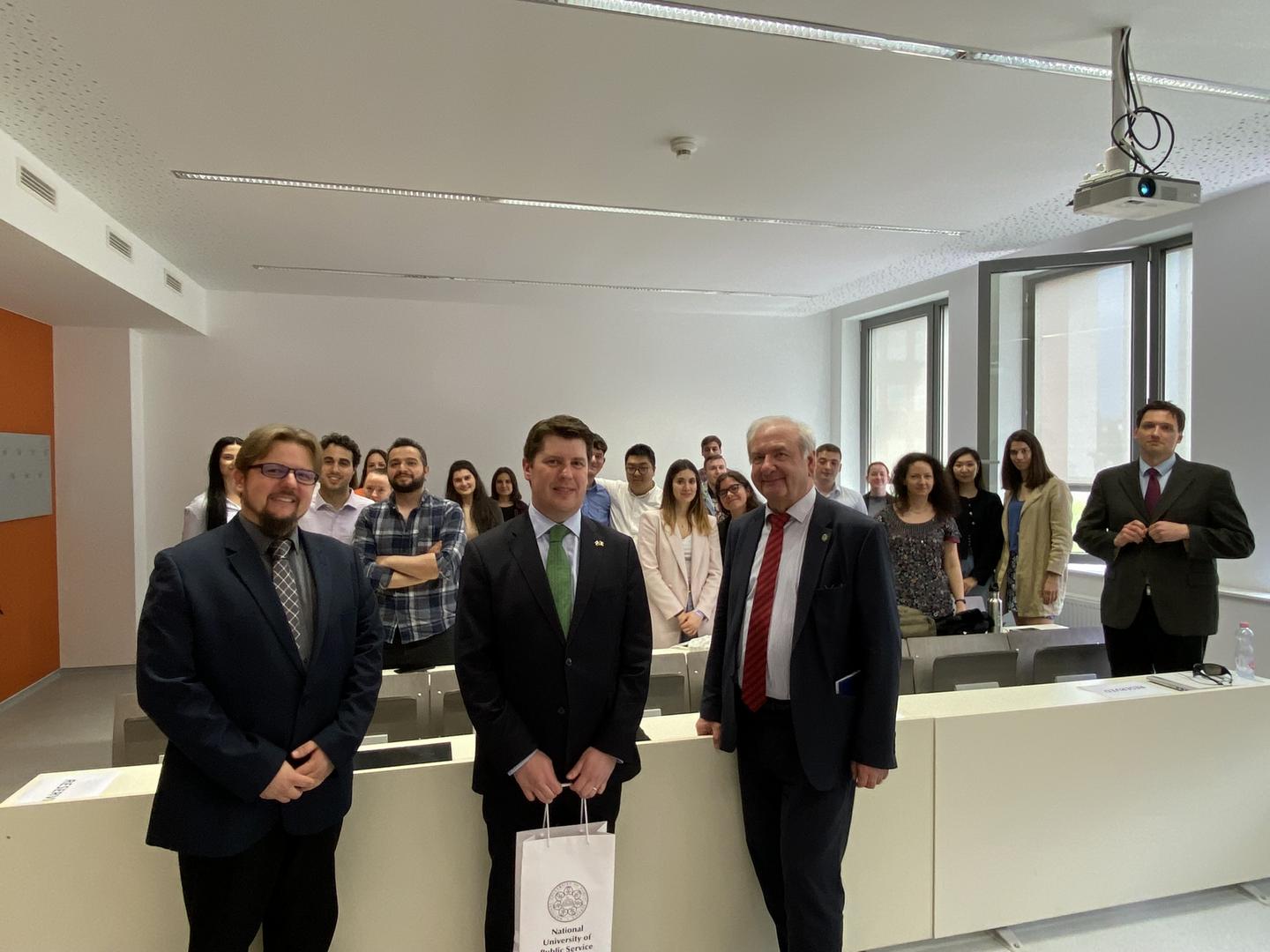 The Ambassador of Ireland to Hungary, His Excellency Ronan Gargan, gave a guest lecture to Hungarian and international students at the National University of Public Service on 4 May 2022. The Ambassador, who was appointed in 2019, gave a 90-minute presentation on Ireland's foreign policy, including its development in the 20th century and current priorities such as climate change policy and dealing with the consequences of Brexit.

Ronan Gargan was welcomed by Dr Péter Krisztián Zachar, Deputy Dean for International Affairs and Head of the Department of International Relations and Diplomacy. In his short welcome speech, he stressed that Irish-Hungarian relations have always been characterised by a sense of historical common destiny and mutual cultural interest. The two countries can rightly learn from each other, given that they share a common foreign policy toolbox, including the promotion of international cooperation and foreign economic relations, as well as cultural diplomacy and support for communities abroad.

The Ambassador began his presentation by outlining the general features of Irish foreign policy. He stressed that Ireland's cultural attractiveness provides a solid basis for foreign investments and trade. Through the Global Ireland initiative, Ireland seeks to capitalise on relations with rapidly developing countries. As one of the most globalised countries in the European Union, Ireland has a primary interest in preserving multilateralism and a rules-based international order. With over 70 million people of Irish descent worldwide, Irish foreign policy actively promotes the preservation of the cultural identity of the Irish diaspora.

Among the current challenges facing Irish foreign policy, he mentioned the structural changes in the European Union, the consequences of Brexit, the crisis of multilateral institutions and geopolitical changes, including the ongoing war between Russia and Ukraine. The current priority for Irish foreign policy is to mitigate the negative impact of Brexit on British-Irish trade and to ensure that it does not jeopardise the 1998 Good Friday Agreement. The Russian-Ukrainian War has shown that Ireland is part of the West, but maintains its military neutrality and therefore is not a member of NATO. Ireland strongly condemns Russian aggression against Ukraine and is committed to working within the UN, where it is currently a non-permanent member of the UN Security Council, and with EU partners to hold Russia accountable for its aggression against a sovereign country. On defence, Ireland will remain militarily non-aligned and engages actively in the EU’s Common Security and Defence Policy.  Following a recent review, Ireland is expected to increase its defence spending, mainly on peacekeeping and cyber defence.

The ambassador highlighted climate change policy and international development policy in the context of the future of Irish foreign policy. Ireland intends to lead the way in promoting international climate protection by relying on renewable energy sources, in particular wind energy, and is committed to the Paris Climate Agreement and the European Green Deal. In pursuing a values-based foreign policy, Ireland intends to actively contribute to the global fight against poverty and to increase its official development assistance to 0.7 per cent of its gross national product by 2030.

At the end of the lecture, the audience asked the Ambassador many questions, including about the opportunities of Irish-Hungarian cooperation and Irish cultural diplomacy. In concluding his presentation, Ronan Gargan stressed that the main objective of Irish foreign policy is to preserve Irish national identity and Ireland’s international reputation in a rapidly changing international order, to support effective multilateralism and to remain at the heart of the European Union.

The Ambassador generously provided a very comprehensive study material to the students, which may serve as a solid starting point for the further study of Irish foreign policy.