Our place is in the European Union! 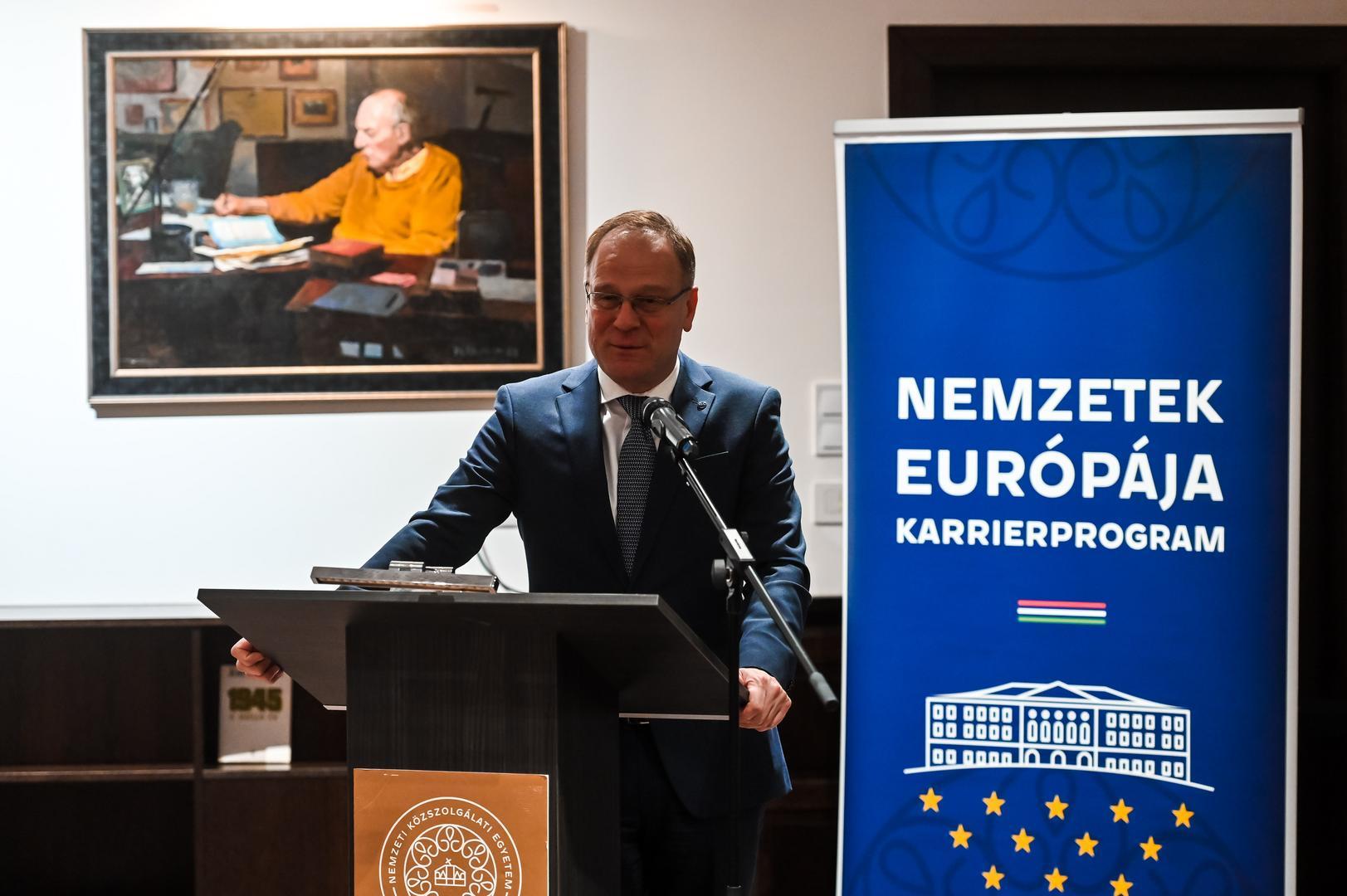 The event of the second cohort, which kicked off in autumn 2021, was held in the John Lukacs Lounge on January 10th. In addition to NEP students, the event was also attended by course instructors, members of the Programme Board, and representatives of last year's first cohort graduates.

"The aim of the programme is not to provide a continuous flow of material knowledge, but to enable everyone to identify larger strategic arcs in the face of everyday challenges," said Gergely Prőhle, Director of the Institute for Strategic Studies at the UPS and NEP Programme Director.

"Attitude is more important than talent!" stated Government Commissioner, Tibor Navracsis, in his welcome speech. "This may seem astonishing at first hearing, because we grew up in a cult where talent, innovation, being original, self-realization are everything.” The Commissioner continued to draw the audience back to this quote by Zoltán Kodály to emphasize his point. "But Kodály, drawing on his long-life experience, from a varied history, probably had good reason for saying what he did. For indeed: perseverance is more important than talent. Talent is worthless if you sell out, become spineless, and give up your own personality."

The former EU commissioner warned that the situation was similar amongst the professionals serving the country. Those who take part in the Europe of Nations Career Programme have agreed to serve Hungary in the European Union in the long term. Tibor Navracsics said that all Member States are doing their utmost to ensure that the so-called EU interest includes at least a slice of their national interest. The national interest is everywhere, and this national interest can only be represented by a strong stance. "We are in no more difficult position than others, we may be a little more alienated in Brussels, but that does not mean that we should turn our backs on Brussels. Our place is in the European Union, in Europe.  The difficulties make it all the more justified that the best people should choose to represent Hungary as their vocation," said Mr Navracsics, underlining the importance of the NEP. He then continued: "It is imperative that the Hungarians have a delegation in Brussels who understand Brussels and speak its language, not so much in the semantic sense of the word as in the hermeneutic and logical sense." Speaking to the students, he said, "When you joined this training, you actually committed yourselves to playing a role in the effective representation of Hungary's national interests in the European Union. So that Hungary not only finds a home, but also feels at home, in the European Union."

The NEP was launched in September 2020 with cooperation between the University of Public Service and the Ministry of Justice, with the aim of increasing the number of Hungarian professionals with relevant policy knowledge who can successfully apply and find employment within the EU institutions. The aim of the programme is to ensure that Hungary is represented in the EU institutions by well-prepared professionals who are committed to both Europe and Hungary, and who speak foreign languages well. The training is a real milestone in supporting those preparing for a career in the European Union as it provides theoretical knowledge and practical, broad-based training to effectively represent the country's interests internationally.   NEP courses are named after prominent public leaders. The first is named after József Antall and the second after Ferenc Mádl.