The new book of János Martonyi was presented 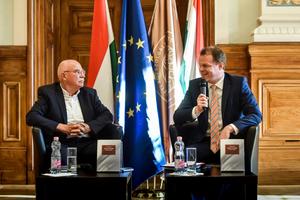 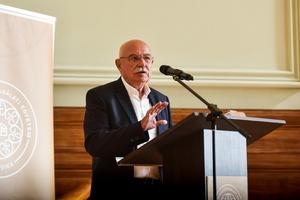 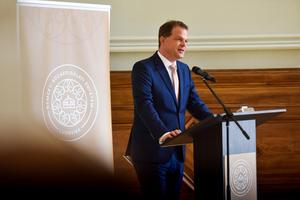 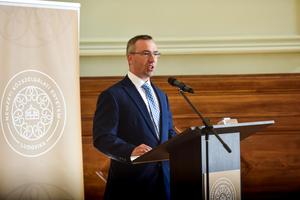 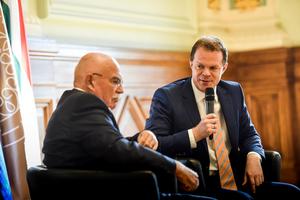 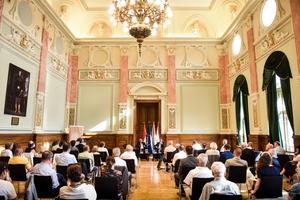 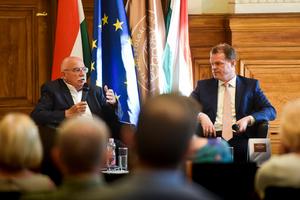 Although there are common values in Europe, and there is also a European identity, the community can only function if it respects the different national identities and cultural traditions of its members, said former Foreign Minister János Martonyi, professor of UPS, at the presentation of his new book titled Nation and Europe. At the event held in the Széchenyi Ceremonial Hall of the main building, Rector András Koltay spoke about the fact that the work presents themes that determine the future of Hungary and Europe in the present, as well as in the medium and long term.

János Martonyi's book titled Nation and Europe is the fourth in the series about rediscovering Europe's common identity, emphasizing our Christian roots and respecting each other's traditions. It raises questions about whether the cooperation of sovereign nations or the United States of Europe is more beneficial, but it is also about, among other things, the growing importance of Central European region and the role of the Visegrád Four group. The three chapters of the volume contain a total of 25 essays and studies. At the presentation held in the Ludovika main building, Rector András Koltay pointed out that the work is already the fourth volume in a row with a similar theme, and in connection with its previous piece, a collaboration has started as a result of which János Martonyi helps the university-building work with “devotion” and “humility”. The volume Nation and Europe is a message of permanence, a conservative worldview that gives the world stability and value stability even in the midst of change, said János Martonyi. The professor of Ludovika added that more than 90 percent of his studies were not written during his term as foreign minister, so they were not written by a politician, but rather by a person interested in law and jurisprudence, someone who is interested in Central Europe and the Carpathian Basin and the fate of his own nation, so the question is: what will happen to the Hungarians?

After the introduction, Rector András Koltay asked the author about the mutually reinforcing power of European and national identity, but also about whether the role of Christian identity and law and the future of Europe are part of a unified European identity. As János Martonyi explained in his reply, that the identity war was not started by the center-right, Christian conservative camp, but by the left, which used political supporters among minorities instead of the shrinking working class, i.e. identity as a political tool. Hungary has never challenged the fundamental values enshrined in Article 2 of the Treaty on the European Union, such as freedom, democracy, equality, the rule of law and respect for human rights. The debate is not in this, but in the “simplified, exaggerated and falsified interpretation”. Although there are common European values, it is not a problem to sometimes interpret them differently, but a community can only function if we respect the differences arising from the different cultural traditions of each country, so the most important community identity is national identity, only then we can talk about European identity, said the former foreign minister, who also spoke about Christian identity. Hungary and Poland would not exist without Christianity, while in some member states and EU documents they leave out and do not refer to Christian roots, which is a problem. The moderate success of the EU's cultural integration is precisely due to the omission of the reference to Christianity, explained János Martonyi, who said that "law is the most important tool for economic integration". After all, the EU is not a political, but rather a legal structure, as opposed to the former CMEA, European civilization is based on legal norms, so law is also an identity-forming factor. In response to a question from János Martonyi, he spoke about the Union's lack of competitiveness, which needs to be improved at European level by strengthening the common market and the euro area, but this efficiency should be improved without Europe becoming an empire.

István Stumpf, former Minister of the Prime Minister’s Office, and former constitutional judge, currently government commissioner, wrote a recommendation for the 216-page volume published by Ludovika University Publishing House, and the presentation was organized by Ludovika – University of Public service and the Hungarian Association of Civil Cooperation.

You can also read about this topic in the July issue of the university magazine Bonum Publicum.

János Martonyi's book entitled Nation and Europe was recently reviewed in the magazine ludovika.hu, which you can read by CLICKING HERE.