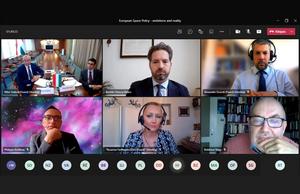 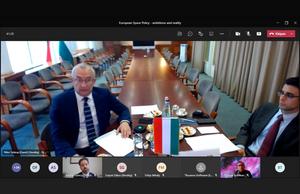 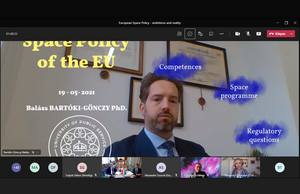 Outer space holds surprises not only for engineers, scientists and astronomers, but plays an important role in international diplomatic processes, as well, it was emphasized at the online event of the Foreign Affairs Club, this time giving insight into the details of European space policy.

Secretary of State for Security Policy of the Ministry of Foreign Affairs and Trade examined the strategic importance of outer space through the lens of security and defence policy. Among other things, Péter Sztáray said that Hungary participates in a number of international space research programs, including the most important programs of the European Space Agency (ESA). The Secretary of State considers it important to draw attention to the risks of outer space, as, in addition to the economic and scientific benefits, serious military and political consequences must be expected on the basis of the discovery of all scientific results. Regarding the latter, he noted that NATO decision-makers have already recognized these risks and now they consider the infinite galaxy of space as an “area of operations”. In response to the development of the field of science, Hungary's first space strategy is being prepared, which sets clear goals for the development of the Hungarian space industry and scientific life, was said in the discussion.

Alexander Soucek spoke about the activities, history and objectives of the European Space Agency. The Head of the International Law Department of ESA emphasized that the agency was not a military organization, nor did the programs it announced support the use of space for military purposes, but acknowledged that the "dual use" of inventions could not be avoided.

Regarding the latter, Philippe Achilleas, Professor of International Law at the Université Paris Saclay, remarked that while the international legal environment was a grey area and did not explicitly prohibit the use of weapons in space, military powers were constantly developing their defence capabilities and military procurement represented increasingly serious sums in the space industry.

Balázs Bartóki-Gönczy, Associate Professor, Head of the Outer Space and Social Sciences Research Group of the University of Public Service, presented the ambitions of the European Union, which are embodied in an EU regulation adopted in April 2021. The EU intends to invest around € 15 billion over the next seven years in the development of European space capabilities, mainly the Galileo and Egnos navigation satellite systems, the Copernicus Earth observation satellite family.

Another important goal of the EU is to have its own capabilities in the field of space situation awareness that is it knows exactly what external threats terrestrial and space systems have to face (space junk, other space objects, space weather phenomena, meteorites).

The Diplomat Training Program of the Hungarian Diplomatic Academy offers a wide range of competitive knowledge for those who intend to work as Hungarian diplomats and represent the national and economic interests of Hungary in the world. The Program aims to recruit successfully graduated students to the staff of the Ministry for Foreign Affairs and Trade.