The delegation of the Indonesian Parliament visited NUPS 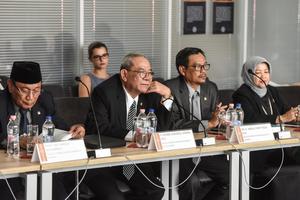 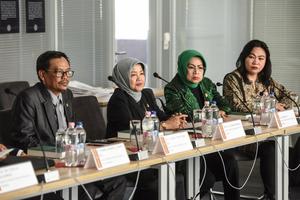 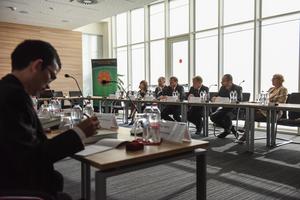 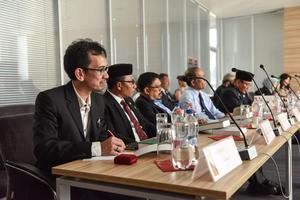 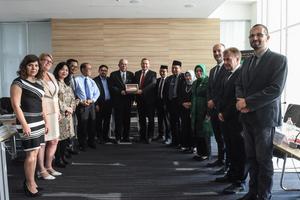 The high-level delegation of the Majelis Permusyawaratan Rakyat, which is the Indonesian Parliament visited Hungary in order to discuss issues of constitution-making with Hungarian experts, scholars and university professors. The members of the delegation – after visiting the Hungarian Parliament and the Ministry of Justice – paid a visit to NUPS, where they were welcomed by Norbert Kis, vice-rector for institutional development together with Péter Smuk, dean, Tamás Kaiser, vice–dean for scientific affairs and Zsolt Szabó, whose research area is comparative constitutional law.

On behalf of the NUPS Norbert Kis greeted the Indonesian delegation and called their attention to an English language book on the Basic Law of Hungary. Each member of the delegation was provided a copy of the book as a gift from NUPS. are to exchange experience on the enforcement of constitutional rules and to develop cooperation between the higher education institutions of Hungary and Indonesia. There is an ongoing amendment of the Constitution in Indonesia, therefore the members of the delegations were mostly interested in the procedural rules existing in Hungary, such as the responsibilities of the organization responsible for constitution-making, the powers of the Constitutional Court and how higher education institutions can contribute to the dissemination of knowledge about constitutional issues. The representatives of NUPS told the delegation that the university has a special position within the Hungarian higher education sphere, and the education of constitutionalism has paramount importance in the curriculum and in research activities. Pursuant to this, the research centers of NUPS lead several projects related to the constitutional law, and constitutionalism, furthermore it puts great emphasis on integrating the expertise of the invited experts and its prominent guests from public bodies into the educational activities.

The questions raised by the Indonesian guests indicated that the experts have a keen interest in the constitutional-making expertise gained after 1989, during the political transition period, in the handling of issues that arose during the democratic transformation and in the constitutional development until today, including the drafting and adoption of the Fundamental Law of Hungary.

The leader of the Indonesian delegation H. Rambe Kamarul Zaman thanked NUPS for hosting the meeting and highlighted that despite the differences between the two countries they gained useful insight from the visit to Hungary. The leader of the delegation has expressed his hope that the Hungarian and Indonesian relations will continue to grow stronger, especially in the field of higher education, where there inter-institutional still only just a few inter-institutional connections.