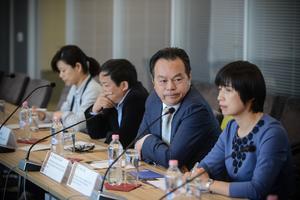 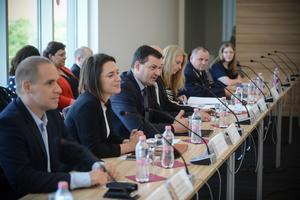 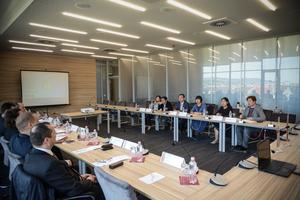 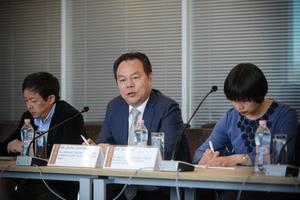 High ranking leaders of the Shanghai Academy of Social Sciences visited the National University of Public Service on 21 May. Apart from the introduction of the two institutes, the representatives also discussed the possibilities of a stronger scientific cooperation.

During the event - which took place at the Educational Centre of the Ludovika Campus - László Odrobina, director for international relations and project management, highlighted that the Chinese-Hungarian relations are important not only on university level, but between the two states as well and NUPS plays an important role in further deepening this relation. In addition to the existing cooperation opportunities, he also briefly introduced the faculties of the University to the Chinese delegation.

From the Shanghai Academy of Social Sciences, Zhang Zhaoan, Vice President of SASS, presented the structure and functions of the institute. He also said that the academy has 27 research institutes covering all aspects of social sciences. The Chinese institution also has its own university publishing and they issue the nationally and internationally renowned weekly scientific journal, the Social Sciences Weekly. The Vice President further added that SASS does not provide BA degree programmes, only MA and PhD programmes. He also noted that they offer research opportunities in their postgraduate research institutes. Similarly to NUPS, SASS has various international cooperation opportunities and several scientific conferences are organised throughout the academic year about topics related to social sciences and sinology.

After his speech, István László Gál, professor at the Institute of National Security welcomed the guests as well. He has been working on the establishment of professional Chinese relations since 2013 and he actively participates in the translation of the Hungarian Criminal Code to Chinese language. Col. Zoltán Krajnc, professor of the Institute of Military Leadership Training described several areas within military science where the two partners could cooperate, highlighting that NUPS recently published a unique volume about ancient Chinese military classics in Hungarian language.

From the Chinese delegation, Duan Gang, Wang Fang and Cheng Jie represented the publishing of SASS who mentioned joint publication possibilities not only in the Social Sciences Weekly, but in the other 26 journals as well that they manage.

At the end of the event, the representatives of SASS offered multiple publication opportunities for scholars of NUPS and they also proposed to sign a memorandum of understanding to strengthen the academic relation between the two institutes.