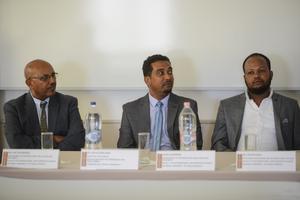 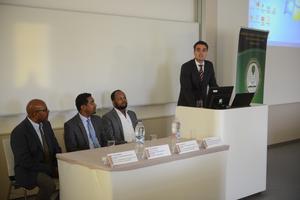 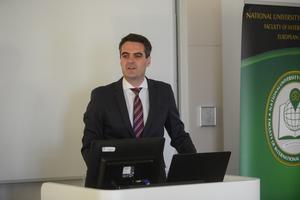 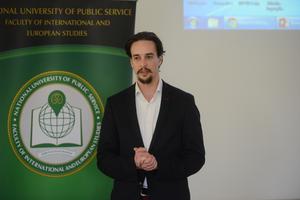 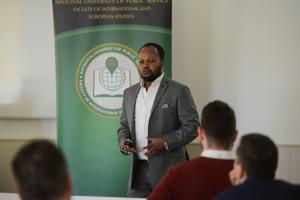 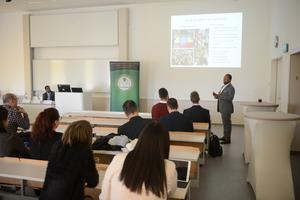 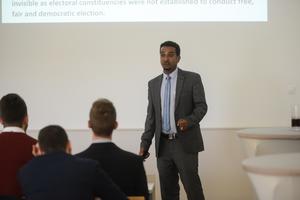 The National University of Public Service organised a workshop about Ethiopia's political transition and Ethiopian Prime Minister Abiy Ahmed’s first year in office. The aim of the event was to provide a comprehensive picture of the political transition of Ethiopia, reforms and regional consequences, and to show how the country on the Horn of Africa has developed from economical aspects. The African country has gone through many changes, but there are still areas which need improvement.

“NUPS has a very good relation with the Ethiopian Civil Service University, and we would like to further deepen the cooperation between the two institutions in the future” - said Mr. Péter Rada, Vice-Dean of the Faculty of International and European Studies, who also added that this workshop is a great opportunity to learn about the African situation directly from Ethiopian experts.  PhD student Takele Bekere said that the country has been governed less democratically in the past, hence corruption was enormous and unemployment rate was constantly increasing. However, following the change of the regime in 1991, serious progress was made in the country, but it was still difficult to maintain the ethnic federalism. Since 2015, demonstrations were regularly organised and the reforms of the new Prime Minister, elected last spring, seemed to be very fruitful. “The newly elected Prime Minister has achieved a number a results in the area of economy, diplomacy, military and culture” - described Takele Bekere. He further emphasized that there are various factors that threaten the transition, such as resistance movements and ethnic differences.

“The Ethiopian politics are going through a significant change. The Prime Minister ended the 20 years long conflict with Eritrea, released thousands of political prisoners, ensured the freedom of the press and appointed more women in the new cabinet” - stressed Mr. Getachew Zeru, who also mentioned that the low number of local reforms may become a problem in the future, because the political change is less significant on district and municipal level.

Mr. Viktor Marsai, senior lecturer of the Department of International Relations and Diplomacy added that Ethiopia is the strongest state in the Horn of Africa and one of the most significant countries of the continent. He also said that, considering the history and independence of Ethiopia, the country has a symbolic status: it is the second largest country in Africa with its total population of eleven million habitants and its GDP is even larger than Kenya’s. The country plays a key political role by serving as the headquarters of the African Union and the East African Community.

Last but not least, the experts discussed that Ethiopia is becoming more attractive for foreign investors, as its economic policy follows the capitalist model. The ongoing privatization, without any corruption, affects the telecommunications and energy sectors, as well as the sugar industry.

“Nowadays, Ethiopia is also facing cyber threats by the spread of spams, trojan horse, malware and phishing” - concluded professor Berhanu Beyene who held an informative presentation on cyber defence emphasizing the need for a joint regional policy and database system.