Austria Opened the New Season of the Ludovika Ambassadors’ Forum 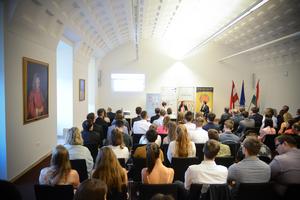 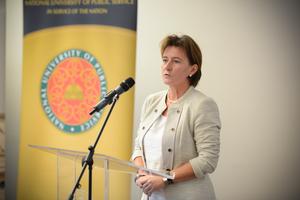 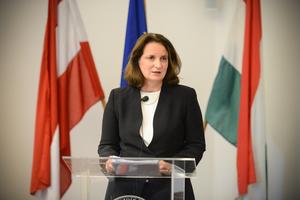 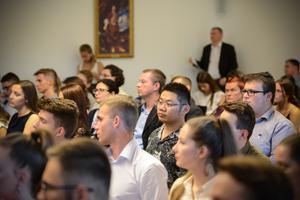 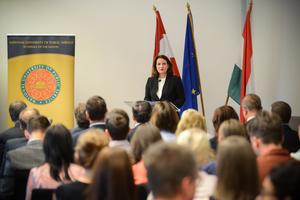 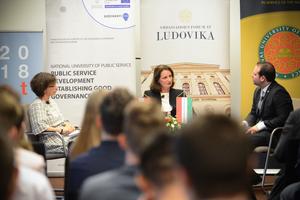 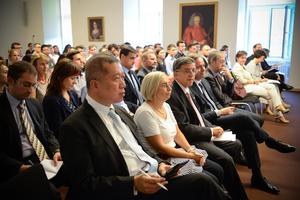 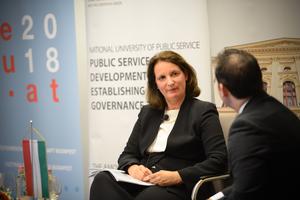 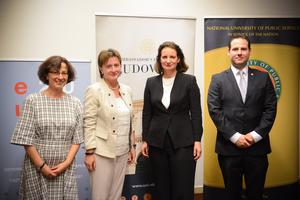 Hungary’s western neighbour, Austria opened the new season of the Ambassadors’ Forum at Ludovika at the National University of Public Service. The first guest of the popular lecture series’ 2018/2019 season was H.E. Elisabeth Ellison-Kramer, Ambassador Extraordinary and Plenipotentiary of the Republic of Austria to Hungary.

Her Excellency started her diplomatic career in 1990. Among other assignments, she worked at the Austrian missions in Helsinki, Los Angeles and Rome too. Between 2002 and 2006 she worked as Minister Counsellor (Human Rights) at the Austrian Permanent Representation to the United Nations and other International Organizations in Geneva. Between 2010 and 2016 she was the Head of Department for Legal Protection, Legal and Administrative Cooperation. She has been serving in her current role since 6 February 2017, and next to being the ambassador to Hungary, she is also the Permanent Representative of Austria to the Danube Commission.

The Ambassador’s Forum at Ludovika event series, as customary is organised by the International Relations Office, and its latest season was opened by Dr. Györgyi Nyikos. The NUPS’ Vice-Rector for International Affairs accentuated in her opening speech that the Ambassador’s Forum at Ludovika is a very important event for the university. She explained that “the event, and especially the special guest is very popular amongst the students. It is a great opportunity for the university students to get an insight into the world of diplomacy and to get first-hand information about the most recent and important diplomatic matters and international challenges.”

“The Austrian presidency’s 6 months are going to be significant in the life of the European community. We have to finalize dossiers before the upcoming European Parliamentary elections next year; much will also depend on the evolvement of the BREXIT negotiations and if they can be concluded soon as well” – mentioned all the challenging tasks Elisabeth Ellison-Kramer.

In the core of her interesting lecture, Her Excellency also explained that the Austrian presidency identified three main fields to work on. First and foremost, Austria considers maintaining the security of EU citizens as the communities most important task. Strengthening and expanding the mandate of the European Border and Coast Guard Agency – also known as Frontex – is an important step in the right direction in this matter, as it allows the efficient protection of the external borders of the EU..

The second important issue Elisabeth Ellison-Kramer identified as an Austrian policy is the maintenance prosperity and development in Europe. The EU is a prosperous and successful community, but its competitiveness can be, and in fact must be improved. Economic pressure is mounted on the EU from the outside, and reforms are required, and the level of digitalization has to be raised.

As the third and last point, the maintenance of stability was highlighted by the presenter. As far as Austria is concerned, part of this stability is the expansion of the European Union towards the Western Balkans and Austria does everything in its power to achieve that.

As it is customary at the Ambassadors’ Forum, the public lecture of Her Excellency was followed by a professional roundtable discussion moderated by the evening’s moderator Dr. Bence Mészáros, Vice-Dean for Science and International Affairs at the Faculty of Law Enforcement. As an invited expert Zsuzsanna Kondor, senior lecturer at the Institute of Public Finances and Financial Law of the Faculty of Science of Public Governance and Administration also joined the conversation.

Elisabeth Ellison-Kramer and the experts discussed Austria’s approach to the BREXIT situation, the various questions concerning the EU budget – especially after Great Britain exit is going to leave a void in the common budget too. The traditionally great Austrian-Hungarian relations were also mentioned, especially in the case of joint border protection and law enforcement cooperation. Naturally, the trade and scientific partnership between the two countries were also mentioned, since Austria and Hungary have a great relationship in every way. The discussion concluded with questions from the audience, and then the conversation could continue in a more informal manner at the usual reception, where the participants could taste not only traditional Austrian confectioneries, but also the best wines Burgenland has to offer.